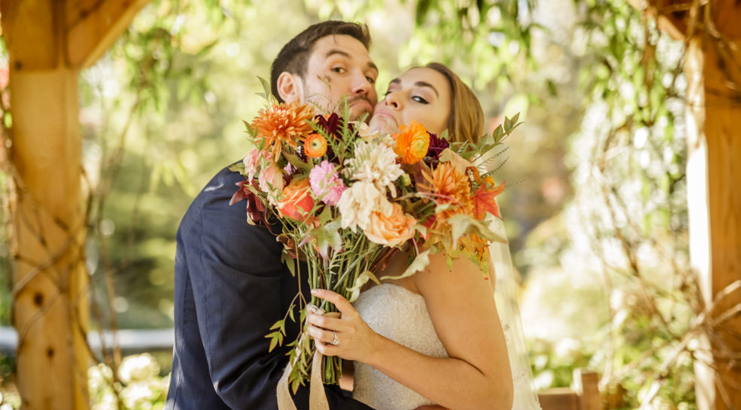 “Love is patient, love is kind.” If you’ve been to a wedding, especially a church wedding, you’ve probably heard this more than once. It’s a classic, beautiful sentiment of love and a great passage to read when celebrating the start of a marriage. There’s a reason you hear it a lot! But if you’re looking for something a little less well known to include in your wedding, or would prefer to avoid Bible verses, this post is for you.

Lord of the Rings

“As Bilbo Baggins said to Frodo, ‘It’s a dangerous business, going out your door. You step onto the road, and if you don’t keep your feet, there’s no knowing where you might be swept off to.’ Love is much the same, it’s dangerous to fall in love with someone, you never know where it may take you.”  –From a ceremony script by Kathie McCutcheon, Sanctuary Interfaith Spiritual Care

“I would rather share one lifetime with you, than face all the ages of this world alone.”

“Two rings to rule them both, two rings to find them, two rings to bring them both and in this marriage bind them.” – From another (different) ceremony script by Kathie McCutcheon, Sanctuary Interfaith Spiritual Care

“Let us step into the night and pursue that flighty temptress, adventure.” – Albus Dumbledore

Just before your vows, “Are you ready to make the unbreakable vow?”

“I love you and I like you” -Leslie Knope

Touched by An Angel, by Maya Angelou

We, unaccustomed to courage

live coiled in shells of loneliness

and comes into our sight

to liberate us into life.

and in its train come ecstasies

Yet if we are bold,

love strikes away the chains of fear

We are weaned from our timidity

In the flush of love’s light

we dare be brave

And suddenly we see

that love costs all we are

and will ever be.

Yet it is only love

which sets us free.

between the sidewalk cracks,

Love lets you find those hidden places in another person,

even the ones they didn’t know were there,

even the ones they wouldn’t have thought to call beautiful themselves.

When we are driving in the dark,

on the long road to Provincetown,

when we are weary,

when the buildings and the scrub pines lose their familiar look,

I imagine us rising from the speeding car.

I imagine us seeing everything from another place–

the top of one of the pale dunes, or the deep and nameless

fields of the sea.

And what we see is a world that cannot cherish us,

but which we cherish.

And what we see is our life moving like that

along the dark edges of everything,

believing in a thousand fragile and unprovable things.

Looking out for sorrow,

slowing down for happiness,

making all the right turns

right down to the thumping barriers to the sea,

the narrow streets, the houses,

the past, the future,

the doorway that belongs

to you and me.

Re-Statement of Romance, by Wallace Stevens

The night knows nothing of the chants of night.

And in perceiving this I best perceive myself

And you. Only we two may interchange

Each in the other what each has to give.

Only we two are one, not you and night,

Nor night and I, but you and I, alone,

So much alone, so deeply by ourselves,

So far beyond the casual solitudes,

That night is only the background of our selves,

Supremely true each to its separate self,

In the pale light that each upon the other throws.

On Friendship, by Kahlil Gibran

Your friend is your needs answered.

He is your field which you sow with love and reap with thanksgiving.

And he is your board and your fireside.

For you come to him with your hunger, and you seek him for peace.

And let your best be for your friend.
If he must know the ebb of your tide, let him know its flood also.

And in the sweetness of friendship let there be laughter, and sharing of pleasures.

For in the dew of little things the heart finds its morning and is refreshed.

Love has no other desire but to fulfill itself.

To melt and be like a running brook that sings its melody to the night.

To wake at dawn with a winged heart and give thanks for another day of loving;

To rest at the noon hour and meditate love’s ecstasy; to return home at eventide with gratitude;

And then to sleep with a prayer for the beloved in your heart and a song of praise upon your lips.

J.R.R. Tolkien wrote this poem for his wife:

Lo! Young we are and yet have stood

of Love so long (as two fair trees

in woodland or in open dale

the airs and suck the very light

together) that we have become

as one, deep rooted in the soil

of Life and tangled in the sweet growth.

Everything I Really Need to Know I learned in Kindergarten, by Robert Fulghum

kindergarten. Wisdom was not at the top of the graduate school mountain, but there in

the sand pile at school.

These are the things I learned:

Put things back where you found them.

Clean up your own mess.

Don’t take things that aren’t yours.

Say you’re sorry when you hurt somebody.

Wash your hands before you eat.

Warm cookies and cold milk are good for you.

and dance and play and work every day some.

Take a nap every afternoon.

When you go out in the world, watch out for traffic, hold hands and stick together.

Be aware of wonder. Remember the little seed in the Styrofoam cup: the roots go

down and the plant goes up and nobody really knows how or why, but we are all

biggest word of all – LOOK.

Everything you need to know is in there somewhere. The Golden Rule and love and

basic sanitation. Ecology and politics and equality and sane living.

And it is still true, no matter how old you are, when you go out in the world, it is best to

hold hands and stick together.

Wherever I am, there’s always Pooh,

There’s always Pooh and Me.

Whatever I do, he wants to do,

“Where are you going today?” says Pooh:

“I think it ought to be twenty-two.”

“Just what I think myself,” said Pooh.

“Let’s look for dragons,” I said to Pooh.

We crossed the river and found a few-

“Yes, those are dragons all right,” said Pooh.

“As soon as I saw their beaks I knew.

That’s what they are,” said Pooh, said he.

“That’s what they are,” said Pooh.

“Let’s frighten the dragons,” I said to Pooh.

And I held his paw and I shouted “Shoo!

Silly old dragons!”- and off they flew.

“I’m never afraid with you.”

So wherever I am, there’s always Pooh,

There’s always Pooh and Me.

It isn’t much fun for One, but Two,

Can stick together, says Pooh, says he. “That’s how it is,” says Pooh.

Tuesdays With Morrie, by Mitch Albom

There are a few rules I know to be true about love and marriage: If you don’t respect the other person, you’re gonna have a lot of trouble.

If you don’t know how to compromise, you’re gonna have a lot of trouble.

If you can’t talk openly about what goes on between you, you’re gonna have a lot of trouble.

And if you don’t have a common set of values in life, you’re gonna have a lot of trouble. Your values must be alike. And the biggest one of those values? Your belief in the importance of your marriage.

Love each other or perish.

Planning and Coordination services for your custom wedding!