Should you use a film photographer for your wedding? 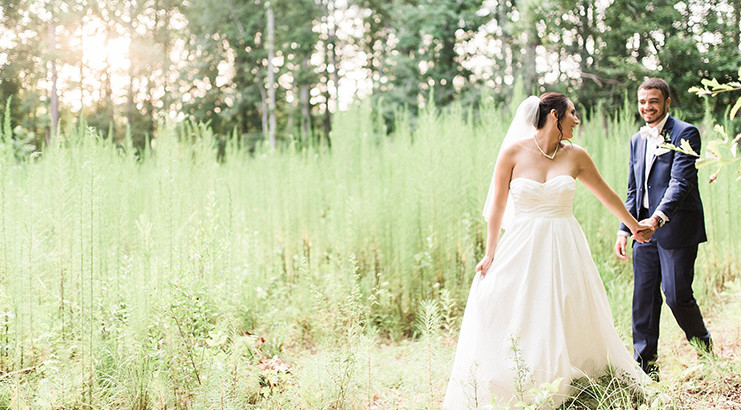 A few years into our business, we both felt the pull to go back to our roots in photography: film. We took dark room classes in high schools 50 miles apart, and the magic that revealed itself in those black and white images captivated us! So we decided to incorporate film into our business and are now hybrid photographers: we shoot on both film and digital cameras! Below are some pros and cons to incorporating film on a wedding day, but we have to admit -- we're a little biased and definitely think you should!

When we look at our parent's wedding photos or photos that our parents took of us as children, we still love them. Unlike Pinterest wedding trends from even five years ago, we love photos on film because we are confident that they will still look just as beautiful 10, 20 or 50 years from now. Photographing with film means we're giving our couples images that we can stand behind not only now, but for decades to come!

We shoot on both digital and film cameras, but we realize that when we shoot on digital, we are always checking the screen in the back and adjusting settings. In contrast, when we shoot on film, we're carefully choosing settings beforehand, framing photos just the way we want them, and being so much more intentional because every time we click the shutter, there is one less photo left on the roll! We love that shooting film requires us to be more present with our couples; because we're not always looking at the back of our cameras when photographing, we're more focused on them!

Does well in bright, natural light

Film loves light, and that's one of the reasons we love it so much! On wedding days, from outdoor ceremonies to golden hour portraits with you and your new spouse, film turns natural light into pure magic! We love the way film can take really bright settings, like during the first look or a ceremony, and create gorgeous images that retain details in the highlights, like the white of a wedding dress or the folds of a flower in a bouquet!

As mentioned above, film is a very light-hungry medium. If you are getting married inside in a dark venue or during winter months when there is less natural light, we will probably rely more heavily on digital to capture special moments because film won't be able to work as well (without artificial lighting)!

There's no denying it: every click of the shutter costs us a few dollars. We're selective about the photos we take on film, and we make sure they are the most special and meaningful of images. You can snap away to your heart's content (or until your memory card is full) on a digital camera, but once a roll of film is used, a new one has to be put in!

Because we aren't shooting on memory cards, film has to be reloaded after a roll is used. Because of the slower nature of the work, we love that we shoot hybrid (with digital and film) so we are never missing “the shot” or an important moment.

We are Radhika and Ian, a husband & wife team of wedding photographers, documenting the wonder of intentionally crafted relationships.